In the second and most recent episode of the eighth and last season of Game of Thrones, I was happy to see Brienne of Tarth became a knight which she fully deserves. Yet my favorite scene is when Bran Stark and Jaime Lannister finally came face to face – their first time since Jaime pushed Bran out of a castle window in the first season eight years ago. Bran, who was then ten, loved to climb the castle walls, but in one of the rooms of their family home in Winterfell, he saw their guests Jaime and Cersei Lannister making out, which would have been a big scandal because they were brother and sister, and Cersei was married to King Robert Baratheon. So Bran was thrown out so nobody would know.

But Bran survived, and he became crippled, but he never told anyone. Since then, he had also become chosen as the new Three-Eyed Raven, a seer with clairvoyant powers whose mind can go through time and space. He can read the minds of others. He can also look into anywhere in the world, and that was how he knew that the Night's King and the countless army of the undead White Walkers have breached the Wall and are now marching towards them. And the only one who can stop the immortal Night's King is the powerful Three-Eyed Raven, so he has to kill Bran first.

Bran can also see into the past, and he found out that his brother Jon Snow is not the illegitimate son of their father Ned Stark. Jon's real father is Rhaegar Targaryen, the son of the overthrown King Aerys Targaryen. His real mother is Lyanna Stark, Ned's cousin and also of noble blood. And Jon's real name is Aegon Targaryen. Therefore, Jon is the rightful heir to the Iron Throne and the Seven Kingdoms.

I love the graphic novel by Daniel Abraham and Tommy Patterson based on the novel by George R.R. Martin, especially since I now know who really killed Jon Arryn, the first Hand of The King of Robert Baratheon who had seized the throne from Aerys Targaryen. After Arryn died, Robert went to Winterfell to ask his close friend Ned Stark to take the position of royal adviser and become the second most powerful man in the realm. Robert loved Lyanna, Ned's cousin who had died while giving birth, and Robert rebelled when Rhaegar abducted Lyanna. But it was all a lie – Rhaegar and Lyanna loved each other. They were married in secret – which Bran had also seen. Lyanna died giving birth, and on her deathbed, she made Ned vow to protect the child from Robert, and so Ned raised the boy as his own. As for Daenerys Targaryen, a.k.a. Khaleesi, a.k.a. The Mother of Dragons, she was Rhaegar's sister, but she was not the next in line, and the crown has to go to the male heir first. Jon is her nephew, but they didn't know that when they had sex in season seven. 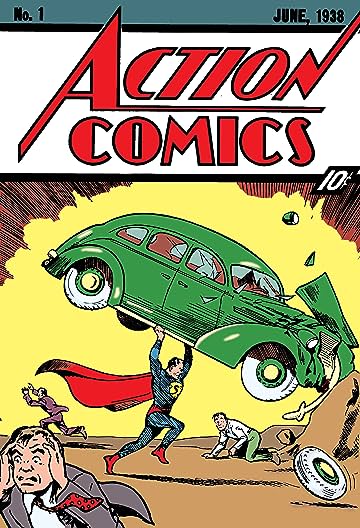 My favorite superhero of all time, Superman, first appeared on this month 81 years ago. This was on April 18, 1938 in the first edition of Action Comics with a cover date of June 1938. The creators Jerome Siegel and Joe Shuster had already the core element – a baby from a doomed planet who has been sent to Earth with super powers. This is the iconic comic book that has been sold for $3,207,852 in 2014 on eBay. Nicholas Cage had another mint copy that was sold for $2,161,000 in 2011 in an online auction. So I'm happy that I have my own copy without having to spend millions.

In the original story, the infant was turned over to an orphanage. There was no mention of Jonathan and Martha Kent and Smallville. Which is funny because, many years later, when he was about to be killed in "Batman vs. Superman," they discovered that their mothers were both named Martha. The boy still grew up to become a reporter named Clark who works for The Daily Star – not The Daily Planet. But there is a fearless reporter named Lois, but no last name, just Lois. In a party, she slapped a gangster named Butch Matson, and he got back by kidnapping her. Superman ran after them, shook them out of the car, and he threw the car away.

I remember the narration from the vintage cartoons reruns – "Faster than a speeding bullet!" ... "More powerful than a locomotive!" ... "Able to leap tall buildings in a single bound!" Then a group of people would be exclaiming – "Look, up in the sky!" ... "It's a bird!" ... "It's a plane!" ... "It's ... Superman!" In the comic book, Superman could "leap 1/8 of a mile" and "hurdle a twenty-storey building." He can also "run faster than an express train," but "nothing less than a bursting shell could penetrate his skin." Apparently, Superman was not completely invincible in those days – not yet The Man of Steel.

But there was no kryptonite back then, either. Life in 1938 seems simple. It was the time of great world leaders like U.S. President Franklin D. Roosevelt and Philippine President Manuel L. Quezon, and the Commonwealth, the transitional administration where the Philippines would cease to be a colony of America, and finally become a sovereign nation. It was mandated by the Tydings–McDuffie Act, but which also made Filipinos in the U.S. as aliens to be immigrated. In the popular "Maritess vs. the Superfriends" skit by Filipino-American stand-up comic Rex Naverette, a Filipina named Maritess says that Superman is also an alien, but he was not being deported. Why? She said: "Because he's white!"

The Story of Superman

Maritess vs The Superfriends

Manila, Queen of the Pacific

A Tale of Two Captain Marvels 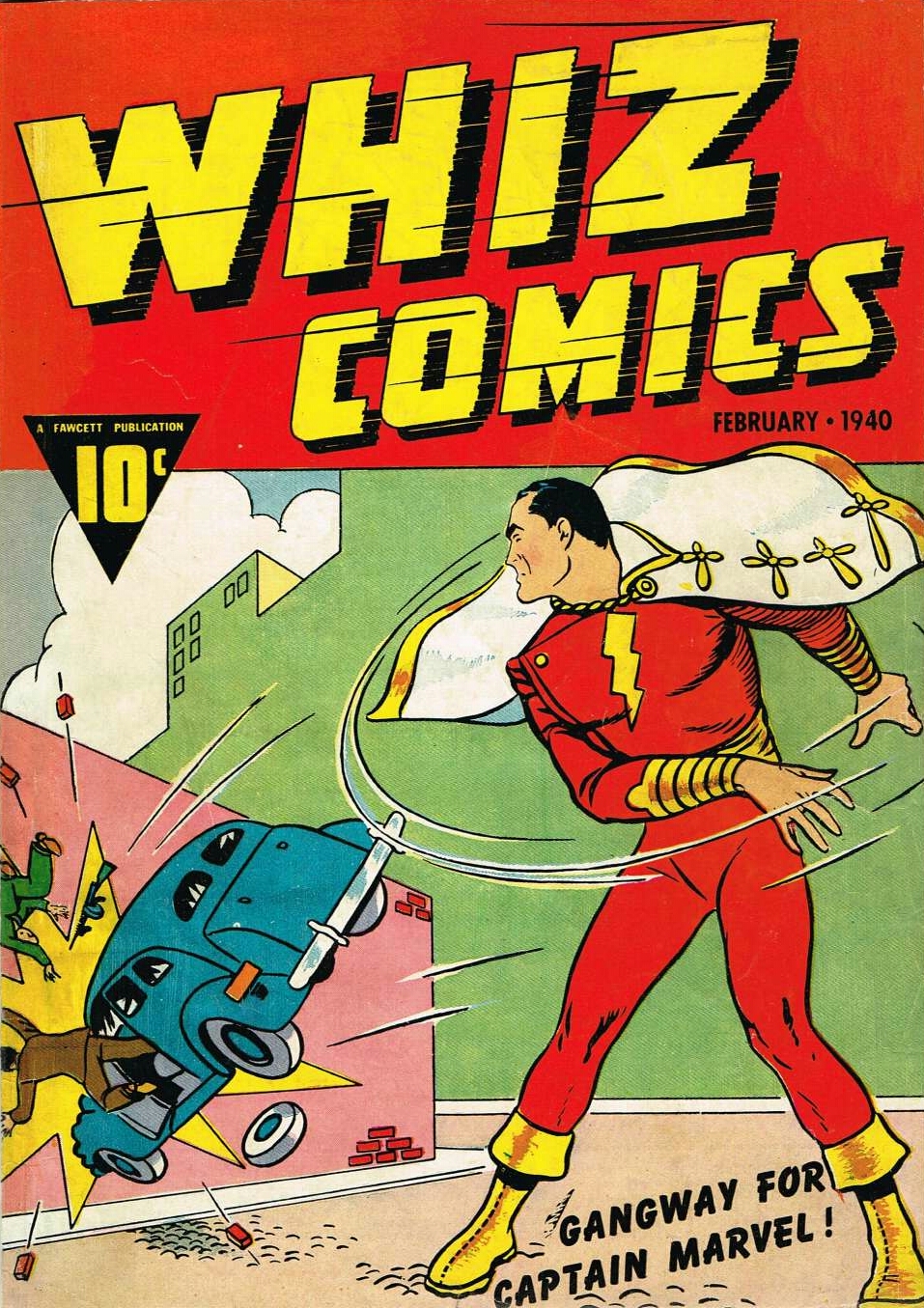 A Tale of Two Captain Marvels
By Jonathan Aquino

I first knew Shazam and Captain Marvel from the Saturday morning cartoons of my childhood. A boy named Billy Batson would say "Shazam!" and he would become Captain Marvel. So they were actually the same person. I think this what inspired the Filipino comic artist Mars Ravelo to create Captain Barbell who also has a younger alter-ego named Enteng. Captain Marvel's superhero name was Captain Marvel, not Shazam, and his costume was red with a bright yellow lightning symbol on his chest.


So in the recent DC movie "Shazam", he was wearing his original costume – but he's not Captain Marvel. And in the equally recent Marvel movie "Captain Marvel," the hero was a girl with a different costume who was apparently an alien. So what's going on? Let's start from the beginning. The original Captain Marvel, the Billy Batson Shazam, was created by Bill Parker and C.C. Beck, and first appeared on February 1940 through Whiz Comics published by Fawcett, and to which I just found a vintage copy.

But, in 1951, National Comics (the forerunner of DC Comics), publisher of Superman, sued Fawcett because Captain Marvel is too similar to Superman. Fawcett won, and DC filed an appeal, and, two years later, in 1953, Fawcett cancelled Captain Marvel and all its superhero as settlement. That meant that nobody owns the copyright to the name "Captain Marvel" anymore. So in December 1967, Marvel Comics published its first Captain Marvel, a Kree alien named Captain Mar-Vell created by Stan Lee and Gene Colan. Apparently, being Captain Marvel is passed down, and it was eventually inherited by Carol Danvers, who is the hero of the new "Captain Marvel" movie and will appear in the upcoming "Avengers: Endgame."

Then, in 1972, DC got the rights to Shazam from Fawcett, and published the "Shazam" comic series on February 1973. But they can't use the name "Captain Marvel" because it's now owned by Marvel Comics. Makes sense. But it seems to be different on TV. There was a live action series in the 40s and the 70s and an animated series in the 80s with the Billy Batson Shazam as Captain Marvel. The cartoon is the one with Mary Marvel and Uncle Marvel. There was also Captain Marvel Junior who is Freddy Freeman who is in the new "Shazam" movie. Freddie can't call him Captain Marvel, so instead he calls him Captain Sparkle Fingers.

Superman and Shazam vs Black Adam 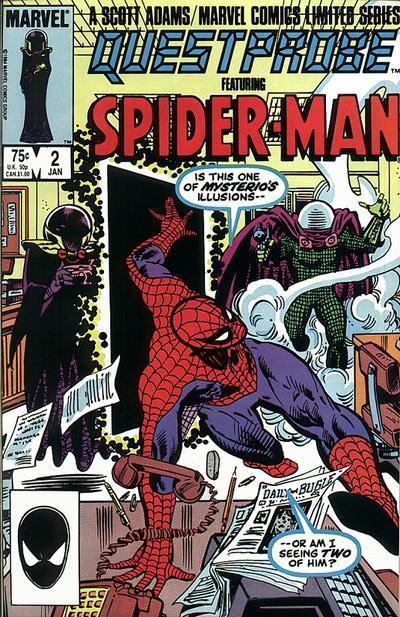 The Amazing Spider-Man
By Jonathan Aquino

One of my favorite TV shows when I was a kid in the eighties was the re-runs of the original Spider-Man cartoons from the sixties. The theme goes like this: "Spider-Man, Spider-Man ... does whatever a spider can ... spins a web, any size ... catches thieves just like flies ... look out, here comes the Spider-Man..." That was also Peter's ringtone when Gwen called because he was almost late for their high school graduation in "The Amazing Spider-Man 2," but he did not tell her he was on a speeding truck with President John Adams.

It was in the cartoons that I first saw the super villain Mysterio, with his magic powers and a head that looks like a fishbowl. I think it's so nice that he will be on the upcoming "Spider-Man: Far From Home" as the Prince of Persia. But wait, I've seen Peter dusted by Thanos – along with Bucky, Wanda, T'Challa, Quill, Falcon, Dax, Groot and half of all life in the universe. So when I saw the trailer with Fury in London, I thought the events happened before Infinity War. But apparently, it is set immediately after Endgame which is also coming soon so I have no idea what happened. Could it be that Peter never got off the bus in the bridge driven by Stan Lee?

Meanwhile, I still watch cartoons, and I'm now reading a bunch of comic books, which is like coming full circle to my own wonder years but without being stuck in the past. I happily found a vintage Questprobe comic featuring Spider-Man versus Mysterio last week. It turns out that Mysterio doesn't have any magical powers after all. His ability is to conjure illusions because he is a movie special effects specialist named Quentin Beck. He has rigged the ventilation system to lure Spidey in a hypnotic trap before their showdown at The Daily Bugle.

But there was a bigger threat. On a planet many, many millions of light years away, there was a sentient gemstone that was manipulating the computer that controlled it, using what seemed to be mental powers. It came to our hero in a form that's similar to Mysterio, calling itself The Chief Examiner, so our favorite web slinger had to fight both of them. The Chief Examiner disappeared, and Spider-Man revealed how Mysterio did his tricks like in a Hercule Poirot story because, of course, our hero always wins. And as the saga comes to an end: "...And within the depths of the computer's printed circuits, in a strange electrical netherworld which exist only in the memory bank of the machine ... Someone waits, someone who plans the next step in acquiring the powers of the most powerful beings on earth ... Someone who was once a man called Durgan!"