The Shadow of The Wind

In the first part of the last century in Barcelona, Spain, there was a library called The Cemetery of Forgotten Books. It was big, designed like a maze, and not a few have found themselves lost. For those who respect memories long forgotten, it was hallowed ground.

There is a tradition known only to those with a deep reverence for books and what they represent. When you go there for the first time, you have to choose a book that will be yours forever, but you have to take care of it, for you also keep the memory of its author alive.

Daniel was nine when his father, the bookseller, Señor Sempere, took him there. The boy went around the labyrinthine corridors, and of all the literary treasures within those shelves reaching up to the ceiling, he found himself fascinated with an obscure novel titled "The Shadow of The Wind" by someone named Julian Carax.

He chose it, or perhaps it chose him, then strange things begin to happen.

With a good book I can disappear for a while, then come back with a renewed spirit. I think it is a privilege to enter a world created by other people, to meet characters given life through imagination.

When I read a novel, I see in my mind a movie, a spectacular pageant with only me in the theater. I remember when I found an old copy of Stephen King's "Christine" during the nineties. I "played" Arnie with my "leading lady," Winona Ryder, as Leigh.

I have been doing my "mental movie versions" since I was a teenager, and hundreds of books later, I'm still "directing." Last week, in Raymond Khoury's "The Sanctuary," I was almost killed in a sword fight against Antonio Banderas; and last night, in Daniel Easterman's "Spear of Destiny," I saw the mortals remains of Joseph of Arimathea.

I love "The Shadow of The Wind" by Carlos Ruiz Zafón, and it has become special to me since I read it almost two weeks ago. I feel a sense of comfort in the image of me working in an old-fashioned bookshop in the 1950s at Calle Santa Ana in Barcelona, of many a quiet afternoon with my beloved father and a mysterious and amazing friend named Fermin Romero de Torres. The characters are Spanish, so I had a Filipino "cast."


The Shadow of The Wind

Why I Don't Want To Be In Westeros

The most significant insight I gained from reading and watching Game of Thrones is the sense of gratitude about living in the world as it is today.

I am grateful that I'm not in the medieval era when no one – not good men like Lord Commander Jeor Mormont of the Night's Watch, and not even the powerful like Tywin Lannister, the Hand of the King to King Tommen and the real force behind the Iron Throne – is safe.

We here have the rule of law. No man can take a life without facing the consequences of his actions, unlike the renegade knight, Sandor Clegane, known and feared as The Hound.

An accused has the right to speak for his defense, unlike Tyrion Lannister, The Imp, who was denied the right to question the witnesses during his trial for the death of King Joffrey.

The justice system, like most things made by men, is not perfect, but I'd rather be in a democracy than in any feudal society.

But most people in Westeros, and in Essos across the Narrow Sea, have lived and died without even knowing the most fundamental liberties we sometimes tend to take for granted.

Here, we can move up through our own merit. But there, it seems the only way to rise from non-nobility is through sheer ambition and cunning, like Petyr Baelish, known as Little Finger.

He had been the Master of Coin, or treasurer, when Robert Baratheon was King, and now he is Lord of the Vail by marrying Lady Lysa Arryn, the widow of Jon Arryn and sister of Catelyn Stark. Now he has his own kingdom with an impregnable fortress, the Eyrie.

But Little Finger has another ace. He has Sansa Stark, the daughter of the martyred Lord Ned Stark of Winterfell, the most respected House in the north. A marriage to Sansa would make him the most powerful man north of King's Landing.

But first, he has to kill his first wife.

A man can keep his own property and bequeath it to his heirs, unlike what happened to Brynden Tully, known as The Blackfish.

The Tullys have ruled Riverrun for generations, and now they are under siege by the combined armies of the Lannisters and the Freys.

This is in retaliation for their alliance with Robb Stark, "King In The North," who had been gruesomely murdered at his own wedding night.

And here, above all, there are no slaves unlike in Astapor, Yunkai and Meereen, the three slave cities conquered by Daenerys Targaryen on her way to conquer King's Landing.

Young girls are not sold to brothels, and young boys are not mutilated and raised as Unsullied, a warrior trained for absolute obedience and complete loss of emotions and self-identity.

In our realm, the dead don't come back to life, unlike Catelyn Stark who came back as Lady Stoneheart and led the Brotherhood Without Banners, a group of fighters who do not recognize the authority of any King.

The dead here don't become flesh-eating monsters, to which I'm grateful. Here there is no Night King and no White Walkers.

But beyond the Wall, thousands upon thousands of the Undead continue to march through frozen wastelands towards the land of the living.

A Storm of Swords and Sorcery 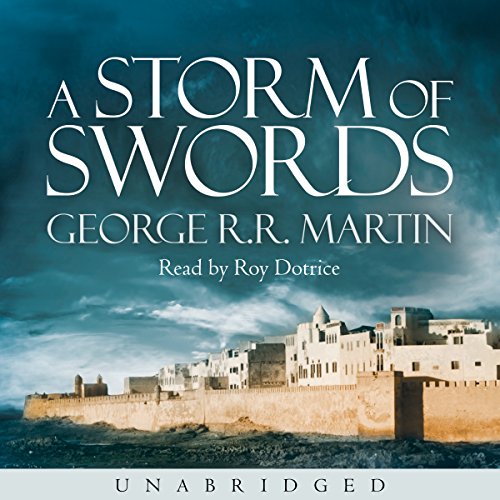 The god R'hllor, the Lord of Light, has proclaimed Stannis Baratheon as the rightful King. Melisandre, the Red Priestess, has seen his victory in a vision.

But the god demands a sacrifice.

A King's blood has power. Stannis' offering is a boy named Edric Storm – the illegimate son of the late King Robert Baratheon.

Melisandre used the boy to cast a spell to bring death to their enemies.

The first was King Joffrey Baratheon.

Joffrey is about to be wed to Margaery Tyrell, the young widow of Renly Baratheon – who been slain by Melisandre through sorcery.

And on their wedding day feast, the entire kingdom was shocked at what happened.

The second name is Balon Greyjoy, who had declared himself as the Lord of the Iron Islands.

Balon's son Theon had grown up with the Starks. Robb told Theon to get Balon's support, but instead, Theon betrayed Robb by invading Winterfell.

One night, Balon came face to face with his brother Euron, whom he had sent in exile long ago – who had returned to seek vengeance.

And the third name is Robb Stark.

Robb had refused Catelyn's idea of exchanging their captive Jaime Lannister for his sisters Sansa and Arya who were held hostage by the Lannisters.

But Catelyn made a secret deal of her own – she sent Jamie free to get her daughters back.

Robb began to lose his men after what Catelyn's has done behind his back. They all hate the Lannisters, and letting Jamie go has robbed them of their chance for revenge.

Then came a greater betrayal. One of Robb's most trusted allies, Lord Roose Bolton, has led them to an ambush.

Robb had also been forced to make an alliance with Lord Walder Frey of the Twins, the two towers on both sides of the Trident river with a bridge that connects them, because they need to cross to get to King's Landing.

And it was from Walder Frey that Robb and Catelyn faced the most heinous treachery of all, the one act that even the gods will never forgive.

There is only one person in all the Seven Kingdoms with the authority to reward Bolton and Frey – one who is more powerful than the King himself.

The Clash of Kings 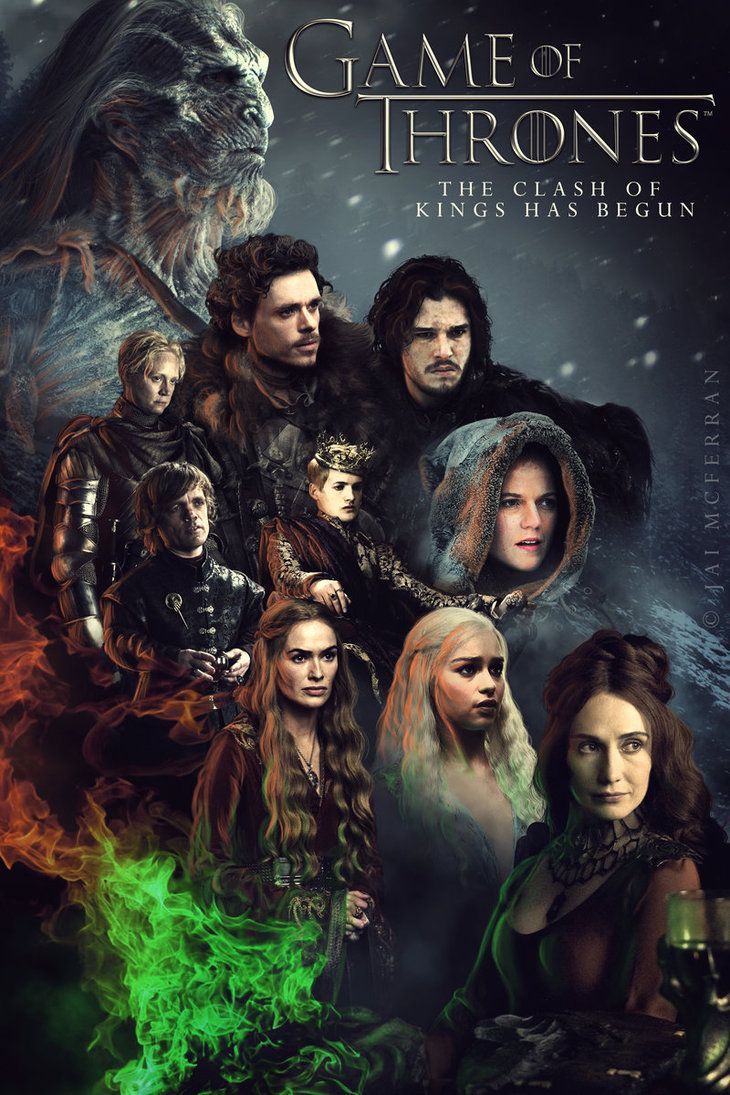 Three men: a king, a priest and a wealthy merchant. Then there is a fourth man: a peasant with a sword. Who lives? And who dies?

Yet with his sword, a mere piece of steel, he holds the power of life and death.

"Power is a curious thing," said Varys, the master spy known as The Spider, in "Clash of Kings," George RR Martin's second novel in his epic saga "A Song of Fire Ice" – which inspired Game of Thrones.

Joffrey is now the King in a swift power grab by his mother, Queen Cersei Lannister, at the moment King Robert Baratheon died.

Joffrey's first act, on orders from Cersei, was to execute Ned Stark, the Hand of the King whom Baratheon appointed as regent until Joffrey comes of age, and one of the few honorable men in all the Seven Kingdoms.

In retaliation, the lords in the north of Westeros have declared independence and proclaimed fifteen-year old Robb Stark, Ned's youngest son, as King In The North.

Robb surprised them all as he won battle after battle as they march towards the capital, King's Landing, to avenge the death of Ned Stark.

And Robb has captured Jamie Lannister, the Captain of the Kingsguard – and the brother of Cersei.

Rumors about Cersei and Jamie are beginning to spread like wildfire. Is Joffrey truly the son of King Robert Baratheon and the rightful heir? Or is he the bastard son of Jamie, a usurper born of incest and treason?

Yet true or not, Joffrey is now the most powerful man in the land.

And Robb has sworn to kill him to avenge his father.

So he needs more men. On a secret mission, he sent his mother, Catelyn Stark, to meet with Robert's youngest brother, Renly Baratheon – who has also declared a rebellion.

Renly has just formed an alliance with House Tyrell, the second wealthiest and most powerful family next to the Lannisters. He just married the young and beautiful Margaery, who has agreed though she knew that Renly is the lover of her brother Loras.

The Baratheons and the Starks share a common foe, the Lannisters, but Renly has another enemy – his brother Stannis Baratheon who is also building an army and an armada of pirates to claim the throne.

Stannis' ally is the mysterious Melisandre, a master of the mystic arts and black magic. She is a priestess for the ancient god R'hllor, the "Lord of Light" – who can bring people back from the dead.

Now the Starks are in the crossfire between the Baratheon brothers.

Yet there is another threat – to all of them.

On the continent of Essos across the sea, Daenerys Targaryen, the last remaining child of "The Mad King," Aerys Targaryen, with a rightful claim to the throne, has come of age.

Yet Daenerys is no mere mortal – she cannot be burned.

And she is the first in a thousand years to possess the power to summon dragons – and the dragons have come.